This blog is no longer in service. Actually, it hasn't been since the end of 2008. But you can go over to the new blog which started in 2013 and see what's going on... check out: www.theSLman.com.

Niko Donburi is best known for his parodies about the thriving virtual world known as Second Life. His lyrics depend largely on satirizing issues and aspects of Second Life--be it grey goo, Linden Lab, furries, or virtual romance.

Niko's parodies about Second Life are well known through out the SL community and were a staple of SecondCast, SL Under the Radar and other popular Second Life podcasts during the peak years of SL . Niko was a featured performer at the 2007 Second Live Community Convention in Chicago, Illinois, and he still holds the record for the largest virtual live music concert ever held in Second Life at 400+ separate sims.

Niko's music is frequently heard in the clubs of Second Life, with old skool virtual deejays keeping songs such as Dear Linden, Dear Linden, It's the End of the World as we know it (in Second Life), and My Favorite Things (About Second Life) in rotation. It's been said that if you really want to know the history of Second Life, all you need to do is listen to Niko's songs. 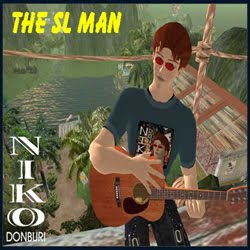 Clicking on each song title will take you to that specific song to listen to or download. All songs may be used under a Creative Commons Attribution-Noncommercial-Share Alike 3.0 License. Lyrics are available on the left side panel.

The Linden - On the train ride back from SLCC2007 in Chicago, I ran into a Linden... (parody of "The Gambler" by Kenny Rogers)

Virtual Stranger - For all those who have had their heart broken in Second Life.... (original)

SL Man - True stories about some of my virtual friends... (parody of "Piano Man" by Billy Joel)

44 lines about 22 Lindens - I got to wondering one day about who these Lindens really are and what do they actually do... (parody of "88 Lines about 44 Women" by The Nails)

Escape (The Second Life Song) - Looking for love in SL? Best be careful your spouse doesn't find out... (parody of "Escape (the Pina Colada Song)" by Rupert Holmes.)

Wastin' Away in Second Life - An ode to the greatest time sink ever created... (parody of "Margaritaville" by Jimmy Buffett)

Living Virtually - What keeps bringing people back to Second Life are not the graphics, the ability to create your own content or any other technological feat. It is the people. (original).

Not all of my Second Life songs are parodies. Here are machinima for five of them that are not....

One of my most popular songs, this parody of the Cheech & Chong classic summarizes the Second Life experience quite nicely. It's annotated to explain what I'm actually singing about!


As amazing as Second Life is, it's the people behind the avatar that make it all worth while. This song is my way of thanking all those who have been my virtual friends...

As many of you know, Second Life allows you to reach a level of intimacy with another person that is beyond the physical. The wall of physicality that we carry with us in the real world gets set aside, exposing our hearts and minds. Such exposure can easily lead to wounds. This song tries to answer the question of how can someone whose virtual cause so much pain that is physical? It was made by my good friend chugabug midnight during the record breaking show from liam and chrissy's barcelona sim and is dedicated to....


Whenever I would bring anyone into SL, the first place I would show them was Svarga. Svarga was the center of artificial life in Second Life. Everything in the entire sim was created to be interdependent, from the clouds to the insects to the plants. You can read more about Svarga here, at New World Notes.


But Svarga, like Niko Donburi, is now a thing of SL lore. It no longer exists. Fortunately, I had filmed a machinima exploration of the sim, which does not do it justice but at least provides a glimpse at what many consider was the most incredible thing ever created in Second Life. This is a solo guitar composition written specifically for the machinima.

Finally, I would be remiss if I did not include this one of Koryo. This is a parcel long donated to me as a music creation space from my best SL friend, Elwood Abernathy. When I am not performing live in Second Life I would often plug in and play here. Since this was my first machinima, you'll note I forgot to turn off my title. If you look closely, however, you'll see that I am listed as busy. Fitting, that. I had scoured the SL vendors and included as much artificial life on the parcel as possible, including weather effects, renewing flowers, butterflies, birds, insects, and, of course, my cat.

The End of Niko Donburi? 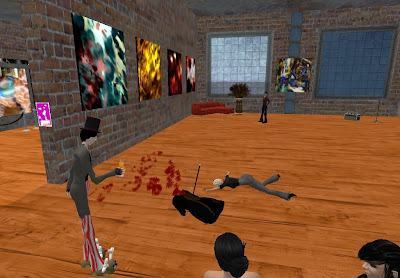 A letter to all fans of Niko Donburi:

No one ever thought Niko's virtual music career would brought short by foul play. Then again, that's how rock stars become immortal, so it should not have been unexpected. It just wasn't expected to happen so soon. While attending Esch's gallery opening, Niko and his date were attacked by an unknown assailant utilizing some form of technology not seen before in Second Life. Both were killed.

For a long time there were concerns, rumors, that the Lindens were plotting on a way to get rid of their biggest critic next to Prokofy. Every time they would make a change to the grid or SL, a song would soon be produced lampooning them. For a while it was thought that Niko would be permabanned, particularly when word got out that he was in possession of a contraband t-shirt which featured the Second Life hand. Pathfinder had it in for him from the days of SLCC2007 when Niko blackmailed him into giving him a tip whilst busking in the halls and Philip was enraged when Niko demanded money to not play while the television news stations were covering the event.

There were other enemies too, of course. Sim owners at whose venues Niko refused to perform. Crazed fans miffed that he wouldn't play all of their Second Life favorites (you know who you are). But many long time Second Life residents maintain it was the Lindens taking revenge for Niko's revealing SL secrets a certain Linden revealed to him shortly before that Linden was eliminated from the world he helped create....

Niko will be missed by all who loved Second Life, quirks and all. Rather than delete everything here, it has remained as monument for all those past, current and future residents of Second Life who want to smile, laugh or remember an early time. A time when Second Life was something new, something incredible.